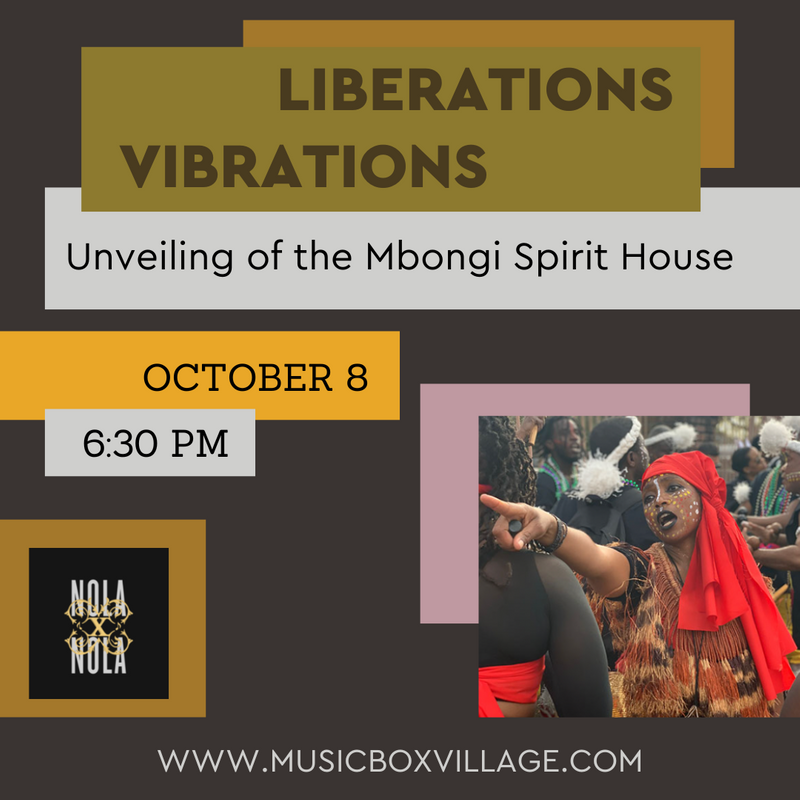 When a project set for the Democratic Republic of Congo was derailed by the pandemic, co-creators, Dr. Kara T. Olidge, Delaney Martin, Monique Moss and Jay Pennignton instead dug into the terra not-so-firma of New Orleans and made a startling discovery.

The land occupied by Airlift’s flagship project, Music Box Village, was once the home and plantation of the infamous enslaver Manuel Andry. It was on Andry’s German Coast plantation that the enslaved Charles Deslonde led the 1811 Slave Revolt. Maimed by an axe in that initial batlle, Andry played a savage role in the Revolt’s suppression. Almost immediately after the Revolt, Andry sent General C. C. Claiborne his letter of resignation as Commandant of the German Coast. Andry then moved his family downriver to a plantation in New Orleans that encompassed the current location of Music Box Village. There, Andry lived both as an enslaver and a capitalist in the trafficking of enslaved Africans until his death.

Grappling with this land ancestry through the generational and structural frameworks of racism and culture collisions that it exemplifies, is the seed that germinates at the very core of Liberation Vibrations: a multi-pronged work that coalesces and memorializes this history, but equally seeks to begin a collective, community healing process. The project creators rooted their collaboration in the traditional Congolese practice of democratic engagement called Mbongi Circle to create panels, a performance, and the Mbongi Spirit House, a new work of musical architecture. The collective work employs, preserves and extends cultural practices from the Houma Nation, Kingdom of Kongo, and African-American peoples, who are all connected to Bulbancha, the Place of Many Tongues.

Through this project, the wider public is invited to experience and explore how history vibrates into the present on land that was once home to the Andry plantation, now Music Box Village, in the place originally known as Bulbancha.

Conversations in Color, curated by the Amistad Research Center

The Amistad Research Center’s Conversations in Color is a free public cultural series that features artists, educators, and community activists in talks about their work and its impact on social change. The Center will curate three talks by leading artists, curators, and scholars that examine historical narratives and their role and influence on our society today.

September 14: Leon Waters and Dr. Rosanne Adderley, Charles Deslondes and Manuel Andry: The Legacy of Freedom and Oppression as they leave the German Coast for New Orleans

Conceived by Monique Moss, Artistic Director and Choreographer of Third Eye Theatre Interdisciplinary and Improvisational Performance Company, in collaboration with New Orleans Airlift, installation artist Jennifer Johnson (J. Renee), and featuring the unveiling of the Mbongi Spirit House, this humble offering is undertaken using the language Culminating Cultural Performance Practice in order to distinguish it as a developing, lived community practice in which the audience participates in the work. The audience is invited to engage through all of their senses, thereby opening themselves to being a present part of a collective healing process.

Featuring Papa Titos Sompa, Master Artist from the Kingdom of Kongo, and beloved local musicians and dancers, Liberation Vibrations seeks to reach across time, employing cathartic performance modalities to affect the state of the Spirit of participants who are willing to embrace harmony produced from honesty.